One of our favorite local runs is the Moodna in Cornwall as it holds, is fun at a wide range of levels, feels fairly remote in parts and, well, it’s local.

So the railroad that runs along the lower stretch of the Moodna is not the Newburgh Branch. The Newburgh Branch starts in… yeah, Newburgh further north and comes close to the line in topic but you have to understand back in the heyday of railroads there were quite a few railroads in the area all competing with each other.

The Newburgh branch belonged to the Erie Railroad which is a different company than our railroad and bridge, though did pass fairly close to it however it split ways with one line heading to Goshen and the other connected to the Erie Mainline in Harriman, NY. We actually walked right alongside the old Newburgh Branch connector at the put in. it ran over the old bridge abutments right as you get on the water. The section below 32 where we boat is actually the beginning of the New York, Ontario and Western (or O&W). The O&W’s own trackage technically started at Cornwall Junction which was right by the takeout. At the traffic light by the red bridge on 9w you make a left and the road takes you to the Hudson river and that’s where Cornwall Junction was. From there the O&W connected to the West Shore Railroad (later the NYC) and had trackage rights to run over their rails to the docks and ferries in Weehawken, NJ. – They also had trackage rights to the north and across to reach the Maybrook Line in Beacon. (this is added for Sean as its his neighborhood which he posted a train video recently on)

The O&W was built in 1884 and once completed ran from Weehawken, NJ all the way to Lake Ontario in Oswego, NY. The line took a slightly more rural route and ended up having many many expensive bridges and tunnels and basically got it all completed and went bankrupt. However they were allowed to continue after being reformed/restructured with different backers. The line did just enough to get by through the years and later were surviving mostly by moving coal from northeastern Pennsylvania via a branch line they built to the Scranton area. A little side note on the West Shore Railroad which the O&W connected to in Cornwall. The line was built to be a competitor to the New York Central which was the big boy in the neighborhood owned by the Vanderbilt’s. Tom might know about the West Shore RR and I certainly do as their mainline ran a block or so from my childhood home in North Bergen. I spent many many days along the tracks exploring, learning and generally getting into mischief. The West Shore RR was formed with the intention of running a line from Weehawken/Jersey City to Albany and the New York half was the Rockland Central RR and the NJ portion was built by the Ridgefield Park RR. They merged and became the West Shore RR. Long story short the NYC bought the sections they needed to get to Albany blocking them out.

The NY Central would eventually get their hands on the West Shore RR in 1935 however the O&W retained their trackage rights over the line to Weehawken. The NYC didn’t exactly want the O&W but they were still competition and thus did what it could to stuff them out. This paired with the demand for coal lowering as oil heating was starting to replace coal for heating would eventually put the O&W into bankruptcy. The Pennsylvania RR was going to back/buy the O&W but ended up making a deal with the NYC to let the NYC buy out the O&W in exchange the NYC would not continue building it’s own railroad line into PA. That line would put them into the heart of Pennsy’s home turf which the Pennsy did not want. So they struck the deal. An interesting side note is that much of the rail line that the NYC built into Pennsylvania would later become the PA Turnpike. So the NYC kept the West Shore RR as it was a better route north for them. However they decided not to keep the O&W as they already had their own route that roughly paralleled the O&W but went through bigger cities where as earlier stated the O&W went through smaller rural towns. Thus O&W flags would fall in March of 1957 as they passed on into history. Once marked for abandonment many smaller sections of the line would later be reactivated by other lines to reach certain on line customers but to O&W as a whole was dissolved.

Now to the old mill and bridge we pass on Moodna river. The mill was originally started as a smaller cotton factory in 1867 and the area was then called Montana, In 1869 the Firth brothers from Scotland bought the property and started the Firth Carpet Company which slowly grew over time and eventually reaching 500 workers at the factory. Surrounding the mill the company built houses for the workers, a school for their children and an activities club house for the workers and families as well. 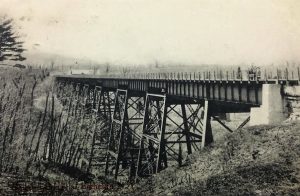 The area then became known as Firthcliffe. The site was perfect as they had water power and later on in 1883/84 the railroad would be built right past their front door and had a rather nice or odd looking churchlike station that was made there.  The Orrs Mills Trestle which is the road name on the other side of the route 32 side of the river. Built in 1883 and removed in 1962.

Here are a few images and resource links. 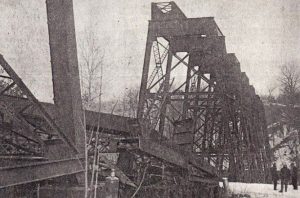 dismantling the bridge in 1962

While looking up info on the Hudson Valley Heritage site in conjunction with NY Heritage digital collections i found this image with the train station in the back right and heading west towards the trestle. i was surprised by the number of tracks running through there in the image.

this link shows the station from the east side and the mill would be just out of the frame to the right.

This one shows a general store and post office that opened up the road from the mill and train station.

Ironically all three of these buildings are still standing today. (i absolutely love google maps and streetview).

The mill from the other side of the river

Along with the image i had on my computer which i now think is a colorized version of this original. the original looks like the river is roaring through there but the color version looks dry. Do note the huge boulder in the river. i wonder if that is still in the river as it’s not the type of thing people would move if they didn’t have to. Actually i think it might be the monster boulder we eddy out behind. It looked too far river right from the picture angle but viewing it in google maps i’m pretty sure it’s the huge one we eddy out behind.

Some additional reading was this article giving a a nice background into the station and another view of the bridge from the rt 32 side.

The mill has a facebook page with a lot of old local area images.

The O&W Historical Society has a Facebook page which i requested to join but had not been approved but i did find an amazing group covering the different railroads in Orange County which had tons of awesome photos pertaining to the topics spoken on.

and one more, a pintrest page with many good images from the O&W including Cornwall and the Firthcliffe stations

Well there you have it. a short look into the topics you brought up which happen to be some of the things i love in historical research into rivers, bridges, industries and especially trains!

About the Author: Christopher Dubetsky