Jack Goldstein, a low-key individual who loved nature, sports, the outdoors and, above all, his fellow man, was interested in respect for and conservation of our natural resources. Kayaking the many wild and scenic rivers of the northeast has been his and his family’s avocation. It was this interest and desire to share his love of God’s given beauty with as many friends and “soon-to-be” friends which brought him together with many early river runners whose names have become synonymous with the legend of our sport. It was the idea of Jack and his friends to form an unstructured club whose main interests would lie in the enjoyment of wild and scenic waterways and to find similarly inclined persons. 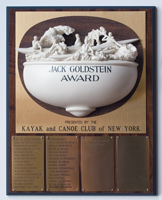 Thus KCCNY was founded and grew. In the early years we also became involved in racing and in the development of national champions as well as world-class competitors.

When Jack passed away in September of 1967, a committee recommended that his work must never be forgotten. Competitors would win trophies, many boaters would come and go. Some would be remembered for deeds and accomplishments good, and some perhaps not so good. But work the like of Jack Goldstein’s would become legend.

Criteria thus established would resemble Jack Goldstein’s continuous constructive work for the betterment of whitewater sport on and off the water and for KCCNY in particular. Recognition is thus awarded for many years of devoted, intuitive, Imaginative and creative service to our Club.

The recipients have been: 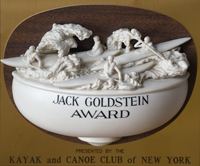 Congratulations to all Goldstein Award recipients. Their service to KCCNY over the years has made them worthy of all our thanks.

The Goldstein Award itself is a porcelain sculpture by early member Gerhardt Meuller.

Past Event (for late registration)