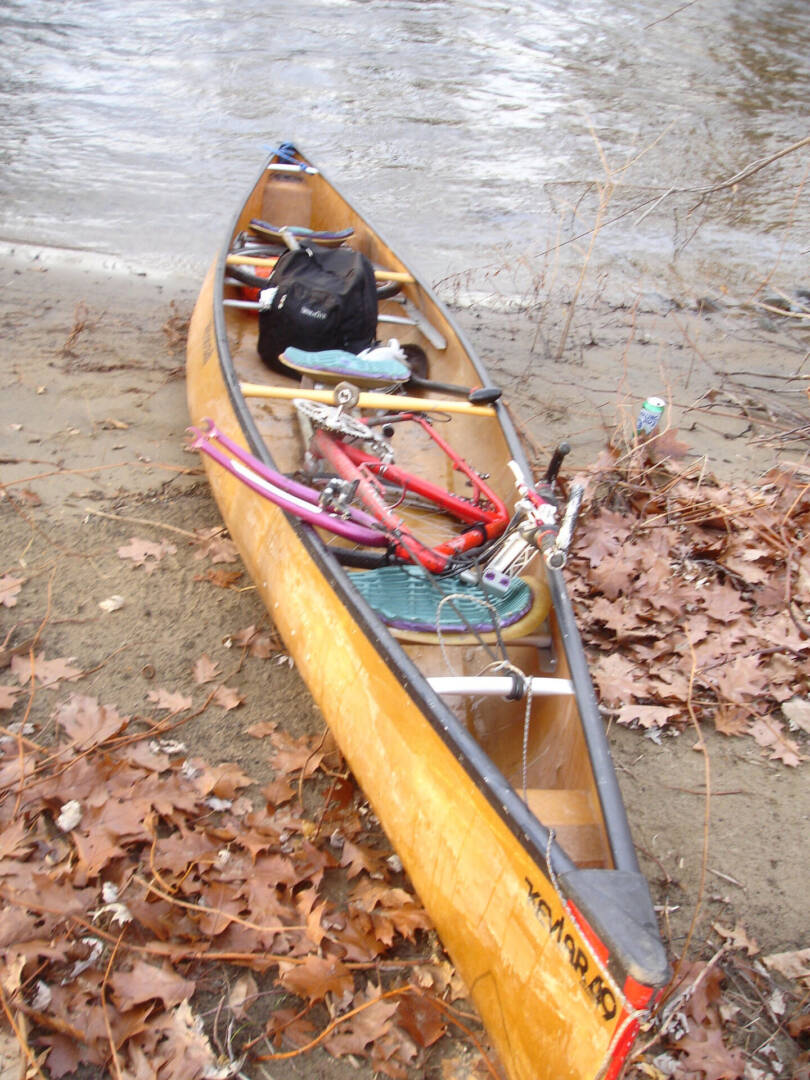 In this new normal many of us our self-isolating enough that we don’t want to get in a car with others even for a head hanging out the window shuttle…so the obvious solution is a bike (or hike) shuttle.
I’ve also seemed way too many Facebook posts about missing gear – more during this special situation but also during the old normal. So investing in a few locks and using them seems like a pretty good idea.

The basics of bike shuttling are pretty obvious. Drop a bike at one end or a boat at the other.

And some words on locks and locking.

Running or hiking the shuttle is another alternative…and for canoeists on easier waters putting the bike in the boat adds the advantage of just paddling as long as you want and peddling whenever the whim and a convenient pullout comes by (hence the picture).

Where to bike or hike shuttle

some suggestions in the NY/NJ area.

Lehigh Gorge – 9 mile upper  and 12 mile lower (Class 2) mostly level ride- beautiful and enjoyable if you take your time along mostly a packed gravel path.
Esopus– (Class 2-3)Fairly level. Main road can be busy with high speed traffic. Relatively flat, less than 5 miles for the usual route.  Main road has a good shoulder but side roads parallel the river. 40 south of Phoenicia, cross river on Bridge by Town Tinker and right onto High Street. Right on Woodland Valley back across river and left onto River.
Deerfield – Fifebrook – (Class 2,3) Fairly long shuttle. The road has some hills but not too steep. Not a lot of traffic and it’s mostly paddlers. Steepest hill is just upriver of Zoar Gap,  so if you aren’t paddling the gap (which is significantly harder then the rest of the river and often skipped by open boats and beginners)  pull out before this hill and you don’t miss much river.
Dryway– (Class 4) Long hill up from the takeout but not a bad ride from there. Andy F. have done 3 laps in a day on his bike. With the long walk up to the parking area you can almost save time.
Hudson/Indian (Class 3+ at release level) – Long shuttle for the Hudson on a fairly busy high speed road. Laps on the Indian possible and not a bad shuttle on dirt roads (ed. note. Normally only an hour and a half release though, which doesn’t give you a lot of time for laps).  River is about 15 miles and the shuttle about the same.
Lackawaxen (Class 2)– About 10 miles mostly flat
Salmon – Another that could be easily shuttled about 5 miles
Sacandaga – Another one that looks OK on the map very short, less than 3 miles total but uphill
Beaver – Possible to walk Taylorville. Could bike shuttle Moshier. The Eagle is park and huck.
Lower Yough – Park and Huck the loop – might be able to bike shuttle the entire run on the rail trail
Black (Watertown NY) – could be combined with a day at hole brothers. Fairly easy shuttle but through town and on busy roads
Tohickon (Class 3+)– Andy Frey has done a bike shuttle numerous times but it is a very demanding shuttle on a narrow road.
Mongaup (Class 2+)–  Biking is a bit of a grind and you need a dirt road bike or at least good brakes for the last run down to the powerhouse. A workaround would be car shuttling just the paved section and the passenger jogging the dirt road section which is all downhill.  Can be walked on either side of the river but it isn’t ideal.

Ken Lockwood Gorge, Raritan(Class 3) – Easy walk or bike shuttle on dirt roads mostly closed to traffic – Very flashy difficult to plan trips.
Lamington (Black) (Class 4)– Not a bad bike shuttle but it rarely runs (very flashy) and is full of wood – all drops are  clear as of summer 2020 but you will get out of your boat 10-15 times – Solid class IV skills needed
Shahola Falls/Upper gorge – Park & Huck
Brodhead (miracle mile)(Class 3+) – Fairly level short shuttle. Stretch it out if you want as the road parallels the river for miles.
Schroon – Short walkable shuttle – very short run should be combined with something else (Indian/Hudson)
Lower Moose – Long shuttle on hilly roads
Bottom Moose – Lot of hills. Not an easy shuttle.
Moodna (Class 3-,4)– From 9w put in head south and take the first left at the light (Sloop Hill Road) and then the first right (technically staying on Sloop Hill) and cut thru the back of the former NY military academy (Trump’s Alma mater that went under in 2016). This will dump you onto local streets thru Cornwall. Taking the right onto Willow which turns into Mill is the shortest route which T’s on Quaker and a right down a short hill is the rt 32 bridge.
The upper class 2 section parallels 32 which has a wide shoulder and is nearly flat.
Alternate mountain bike option. Just east of the Forge Hill Road bridge find a way to get up to the old rail bed and follow this around and you’ll end up on Mill.
Pequonnock (Class 2+)– 511 and then 23 parallels the river. 23 has a wide shoulder thru this section though most folks start at the 511/23 intersection.
Delaware (Class 1-2) relatively flat easy ride distance depends on section.
(This list was compiled with help from Andy F. , Tom H. and Ellen M.)

This site is the informational site for the Kayak and Canoe Club of New York. Go to KCCNY.com for trips, membership, official policies and administration as well as resources such as our river release schedule and gauges.

Any KCCNY member can (and should!) post articles to the KCCNY blog. These can be more formal articles, as one would write for a newsletter, or trip reports, photo galleries, videos — anything you think your fellow members would enjoy or find useful.
If you’d like to contribute, please reach out to Tom Hart.