Pinned on the Moodna

Pinned on the Moodna

Don’t be lulled into thinking that it’s only the crazy class 5 stuff that Wayne likes that can cause problems. I was out with 3 friends last March, and after having a good line through the one class 4 and no problems on the class 3 stuff I got to the last “rapid”. It was really just a short wave train that was fast, but really not even class 2. The very first wave was a small breaking wave, and as I hit it I got quickly displaced about 4 feet to the left, and probably pointed a bit left as well. That left me lined up to go through a couple of small branches from a small tree that was hanging out over the left bank, instead of skirting the end of it. That  wasn’t a problem by itself, but it cheated me out of at least one good stroke, and that’s what I now needed to miss the pair of logs along the bank another 20 feet downstream. 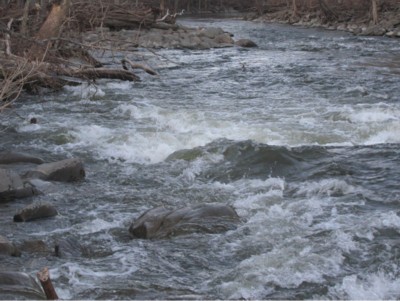 Strainer on the Moodna

Luckily, my instincts were good, and I leaned on to the top log as I broached on it, holding my upstream edge nice and high. The log was at about a 45º angle to the current, with the upstream end against the bank, and the bottom of the log just slightly in the water. The top of the bottom log was just a few inches below the top log, and that log pointed a bit more downstream, so the two logs made a bit of an X shape, with the center of the X at about the back of my cockpit. My boat was bouncing a bit in the current, but I felt pretty stable. While I waited for my friends to come help I first tried shimmying towards the downstream end of the log. I only need to go about 3 feet, but after moving a foot and looking at things I decided there was too much risk that the front of my boat might drop under the top log before I was far enough past it. That offered a chance of flushing past things, but several ways of being pinned and probably underwater, and maybe even trapped in the boat. For some reason that didn’t seem very appealing, so I shimmed back the other way. That took perhaps 30 seconds, which is when my first friend got there.

He started by wading out on the downstream side of the logs to grab hold of me, but it was too deep for him to get a good angle reaching over the top of the log. That was good news, because it mean that if I did go under the logs I’d probably go all the way under instead of being pinned against them or between the logs and the bottom. At that point the other two got there, and I told them to clip a rope to my stern grab loop and pull me backwards and just slightly upstream. What I should have told them was to clip to the safety bar behind the cockpit, on the right side. That would have  helped to keep the boat rolled towards the log as they pulled, but by pulling from the grab loop the boat rolled upstream as they pulled back. I forget if that actually put my head in the water right away, but it seemed like a very good time to get out of the boat.
I pulled the skirt and got out, while keeping a very good grip on the rim of the cockpit, since the current now wanted to push me into or under the logs without the boat. I got my legs on the bottom log and one arm over the top log, then let go of the rim and got the other arm on the log and put one leg over the top log. I could feel a bit of a projection on the bottom log, but couldn’t quite get my foot on it, which would have made it easy to push up and climb over the top log. Instead I just held on a for a few seconds while my friend got downstream and gave me a better hand hold. That made it easy to climb up on the log and  then off the end and onto the bank. Start to finish we figure it lasted about 2 minutes, and I’m pretty sure my friends were a lot more scared than I was. That’s because they couldn’t immediately tell that it was a pretty stable pin, and I was too busy thinking about solving the problem to be very worried.
So here are a few things to take away from the experience:
By Steve McLuckie|2011-10-13T17:46:29-04:00October 13, 2011|Paddling Stories|Comments Off on Pinned on the Moodna

About the Author: Steve McLuckie